It is estimated that people began to live on the plateau in Oarai between 12,000 and 3,000 years ago. According to a survey in 1973, 31 sites from the Jomon period (131st century BC to 4th century BC) were found. In the 4th century, large burial mounds such as Kurumazuka and Hisagetsuka were built.

It is said that in the year 856, two gods, Oomunachi-no-mikoto and Sukunahikuna-no-mikoto, appeared in the Oarai Isosaki shrine and the Sakatsure Isosaki shrine in Hitachinaka City.

The medieval Onuki and Isohama Villages (Miyata Village) and the Naka River basin were ruled by the Satake clan in 1591, after the Edo period had ended. Later in 1609, Tokugawa Ieyasu's 11th child, Yorifusa, entered Mito Castle, which he ruled under the Mito Tokugawa family until the Meiji Restoration. From that time on, Oarai became known as a scenic spot; there are many historical records of numerous lords having visited Oarai from different places.

Many inns were opened in Oarai at the end of the Edo period, and the number of tourists increased when the railway opened to Mito in 1889. In 1919, when the bus service between Mito and Oarai started, the number of visitors to Oarai further increased thanks to Oarai’s beach resorts, many of which are still in business today.

In 1952, the prefectural Oarai Aquarium was built on the Oarai coast (moved to its current location in 1970). In 1985, the Hokkaido-Oarai car ferry service began and became the gateway from the Tokyo metropolitan area to Hokkaido. In 1988, the Oarai Marine Tower was built. In 2002, the aquarium was renewed. 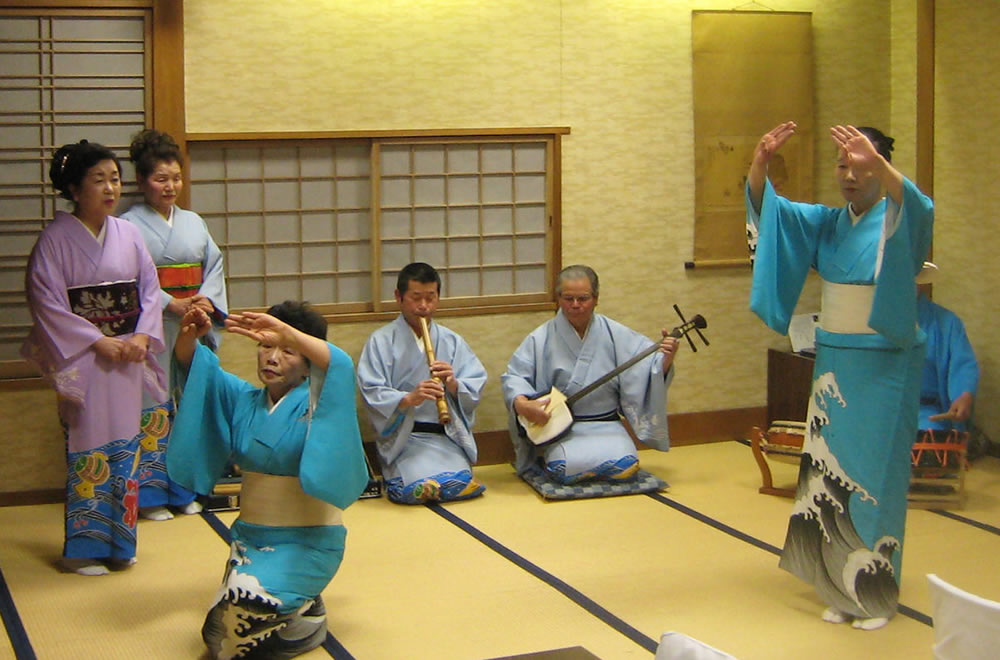 Isobushi is a folk song that has been passed down by the fishermen of Iwai-machi in Oarai town and Naka-minato.

Wantanabe Chikurakubou was born in Iwai-machi, a city famous for its nightlife, during the early Meji era. He wrote the Zashiki-uta, a famous song that was performed by shamisen musicians and geisha dancers.

Then, the blind massagist Sekine Anchu became the attendant for the 19th Yokozuna Hitachiyama, who was the highest ranked Sumo wrestler at that time. Sekine Anchu often sang the Isobushi song, so the song became more popular as they traveled around Japan. 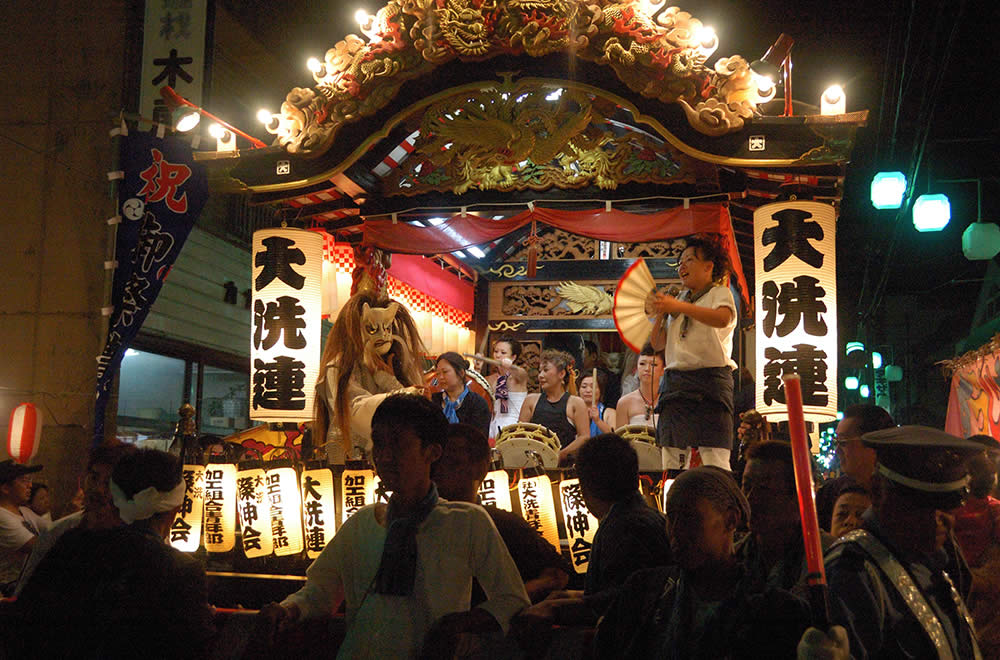 The Hassaku Festival at Oarai Isosaki Shrine is a festival during which people pray for plentiful grains and the stability of their lives. Long ago, the chief priests from Kashima Jingu would ride their horses to Oarai on August 1st of the lunar calendar. In recent years, however, the annual festival for the shrine is held on August 25th. (Sponsorship: Oarai Isosaki Shrine)

On Saturday, the eve of the festival, o-mikoshi (traditional Japanese parade floats or portable shrines) are carried around the town. Then, on Sunday, the Oarai Shopping Street becomes a pedestrian paradise and various events such as food stalls, a float tour, a shrine visit, and an Isobushi (traditional folk song and dance) parade are held. (Organizer: Oarai-machi Chamber of Commerce and Industry) 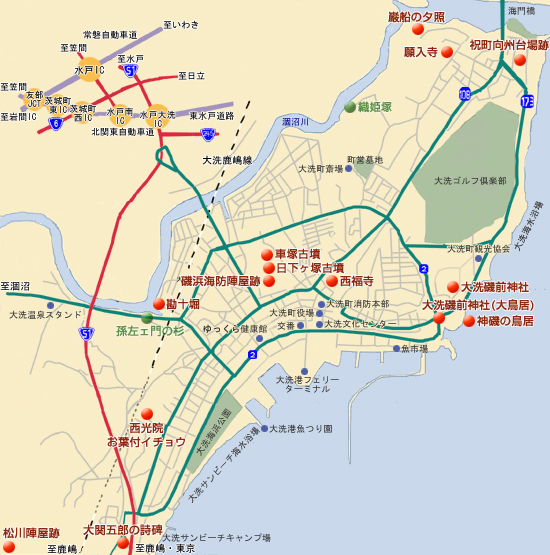 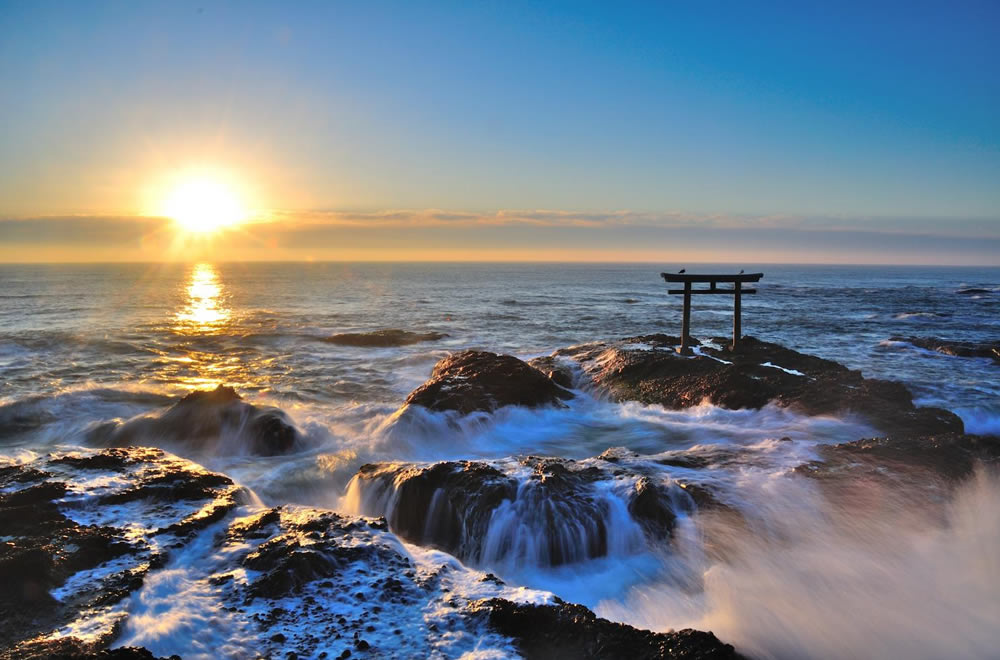 One of the Oarai Isosaki shrine torii gates stands on a hillside along the coast, at a place where gods are said to have descended. Surrounded by the rough waves of the Pacific Ocean breaking on the reef and lit by the morning sun, the torii truly is a divine sight. 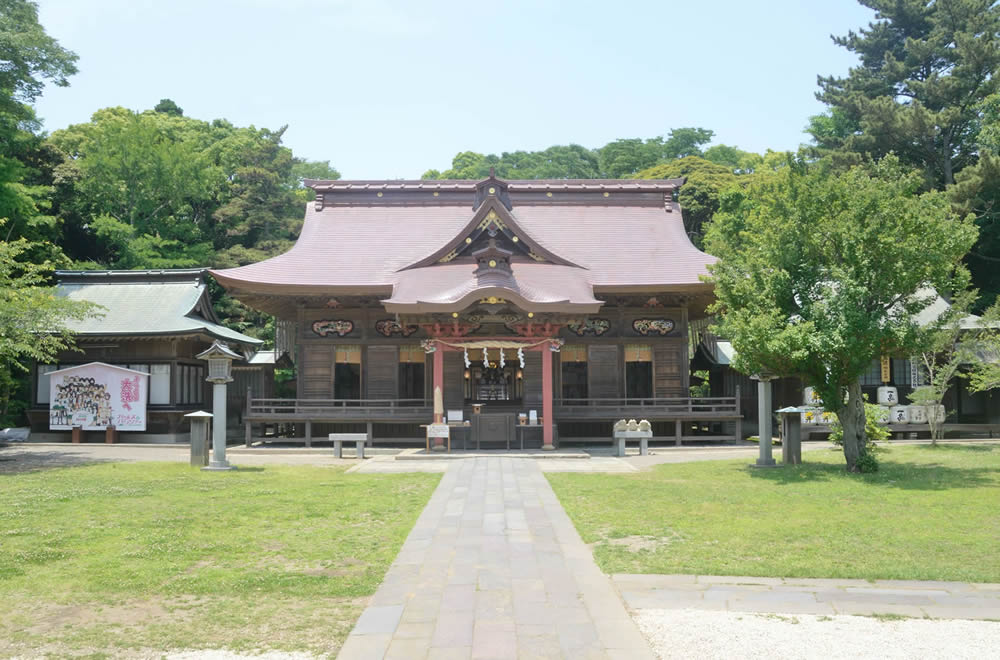 This temple has two gods: “Onamuchi-no-mikoto” and “Sukunahikona-no-mikoto”. Since ancient times, they have been worshiped as guardians of domestic and maritime safety. There is an Oarai Maritime Museum located in the area. 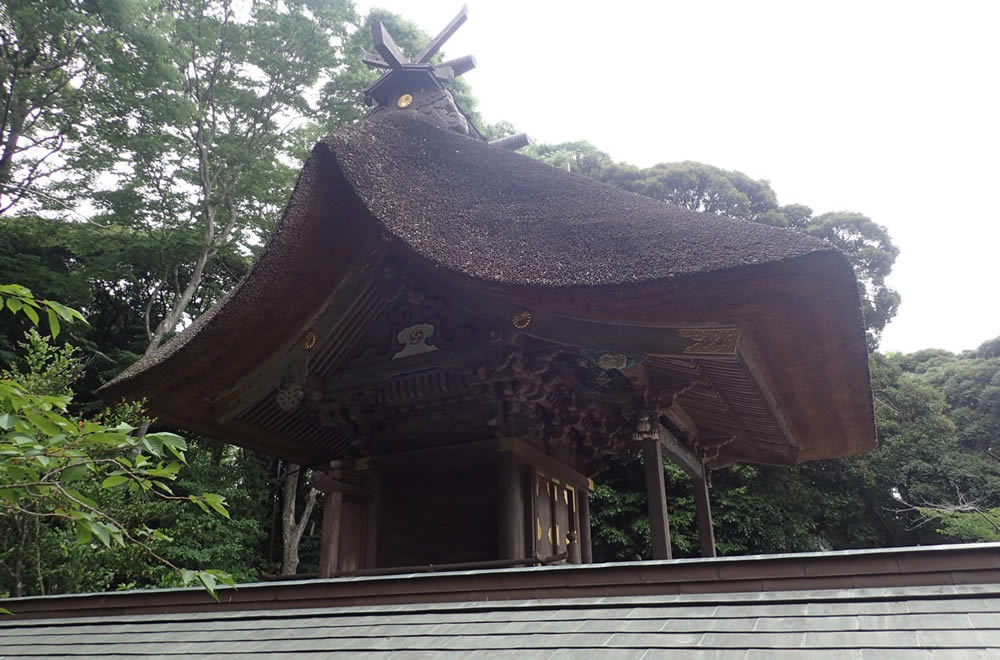 In 1690, Mito's second daimyo (feudal lord), Mitsukuni Tokugawa (Giko) started building the shrine, which was continued by the third daimyo, Tsunaeda Tokugawa (Shukuko.) In this way, the construction of the main shrine, main hall, worship hall and main gate was completed, and it was moved to its current location in 1730. The shrine has been registered as a prefectural cultural asset. 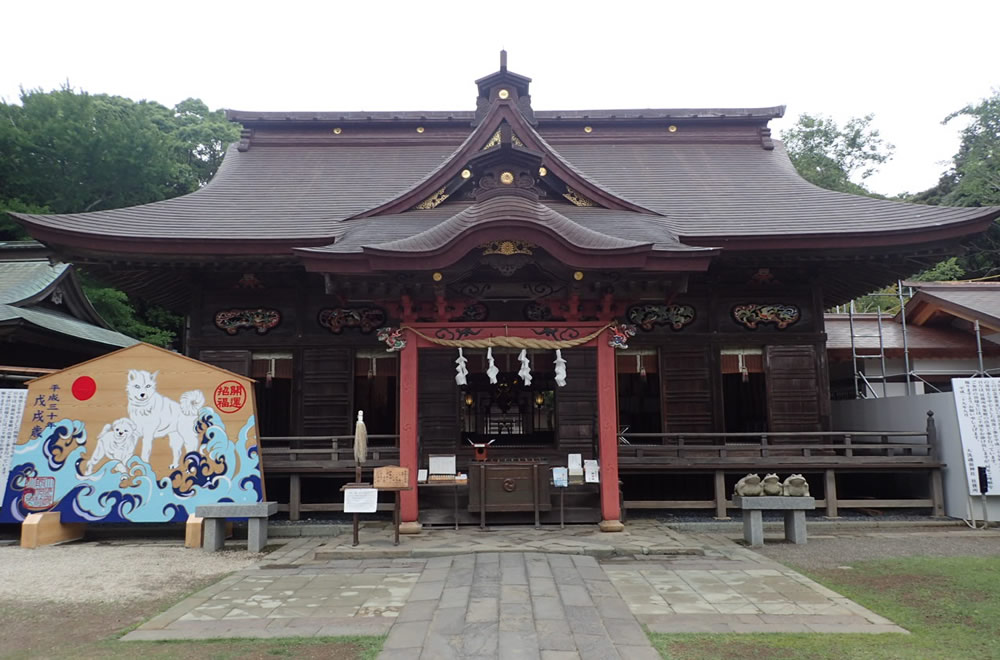 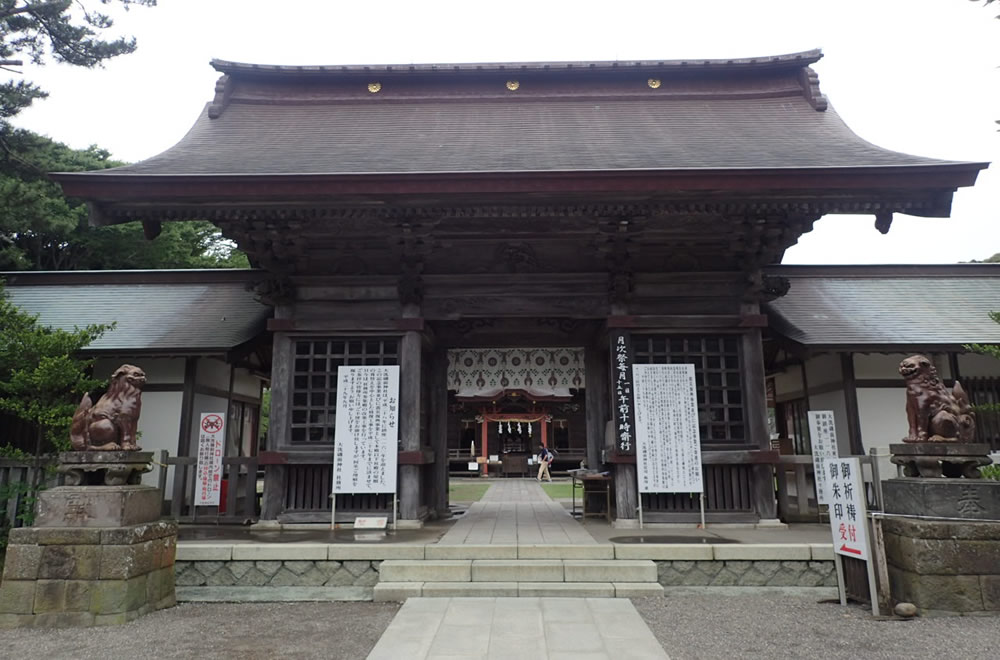 Zuishinmon is thought to have been built around the end of the Edo period. The gate is decorated with many fine sculptures, and its surface is covered with wave pattern designs to represent the sea, symbolizing the shrine’s proximity to the ocean. The sculptures in the center, on the front and the back are engraved with "Inaba's white rabbit", which represents the virtues of priesthood. It is registered as a culturally significant site in Oarai. 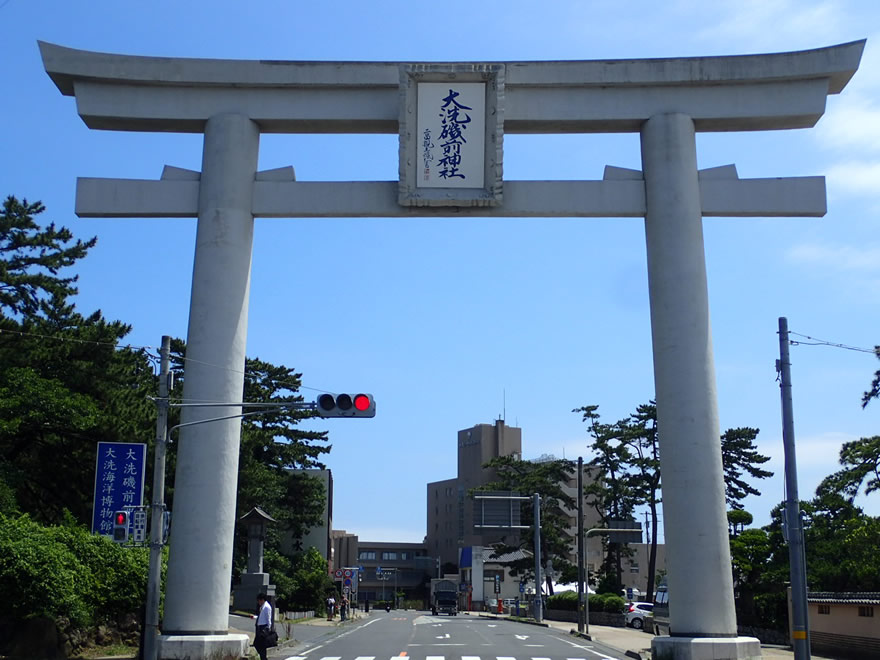 The first Myojin Torii at the road intersection is 16 meters high. 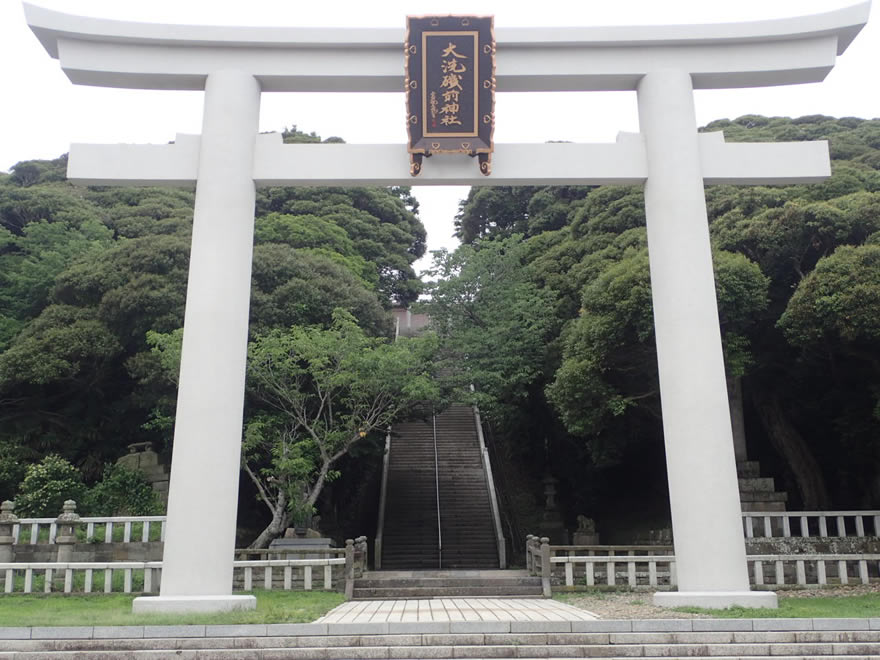 This torii gate is located at the entrance to the shrine area. If you climb the steep stairs in front of you, you will be able to see the shrine. 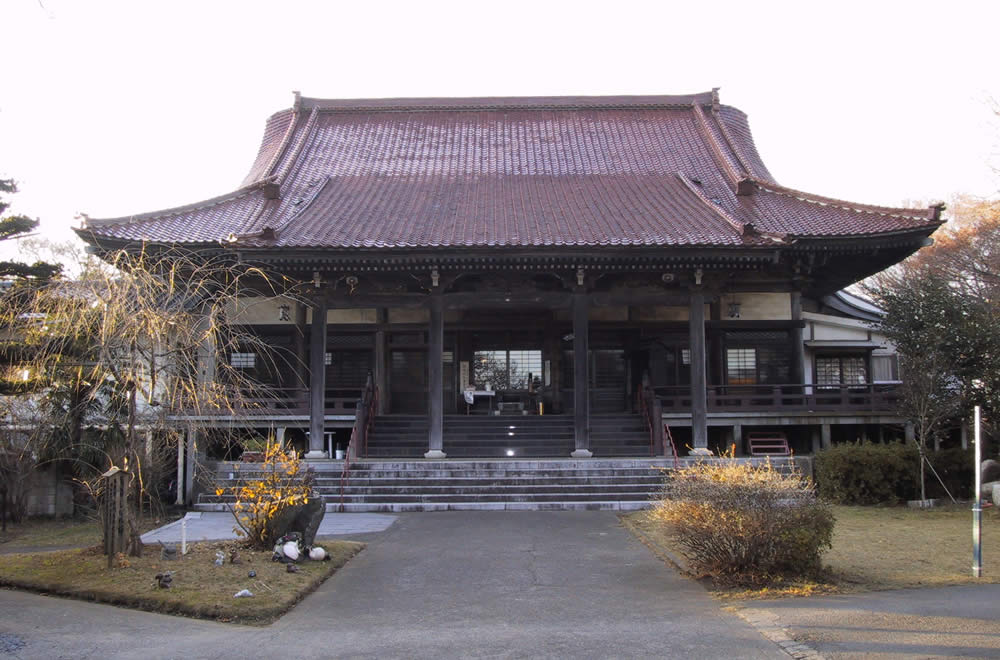 It was opened during the Kamakura period in Furudono-cho, a town in the Ishikawa district of Fukushima Prefecture by Nyoshin, the grandson of Shinran clan founder of Jyodo-Shinshu. It was located outside of Oarai until the first half of the Edo period, but it was later moved to Oarai town between 1673-1681, when Tokugawa Mitsukuni (Giko) served as the daimyo of Mito. In addition to the main statue of Amida Nyorai, images of Shrinran-shonin and prefectural designated cultural assets such as Kougou are stored in the main hall and the Kaikido of Grannyuji Temple. 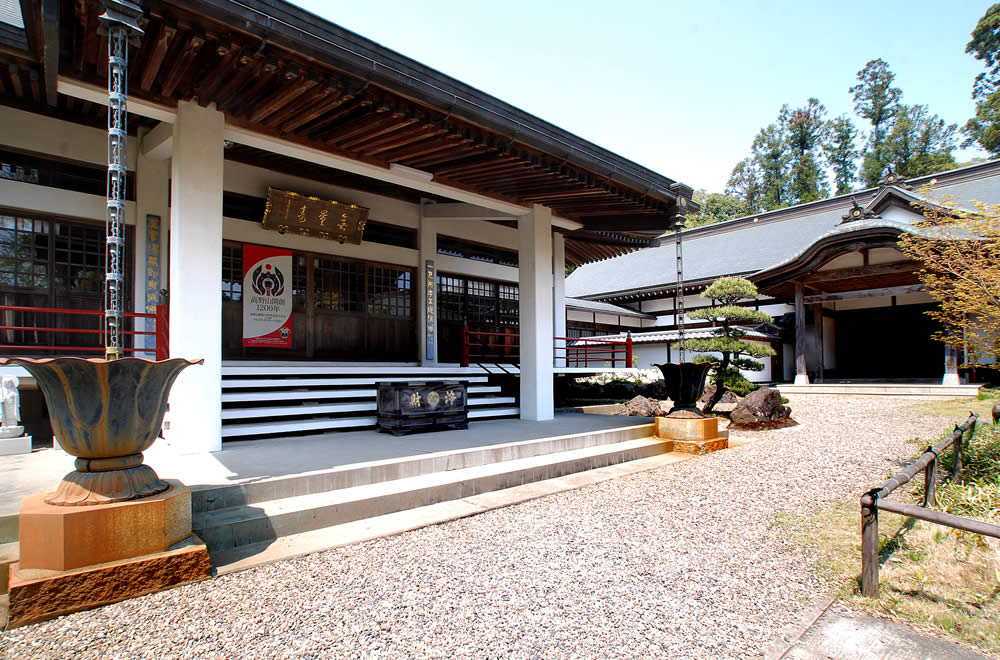 Between 1394 and 1428, Saikouin opened. A wooden Amida Nyorai statue was placed there. 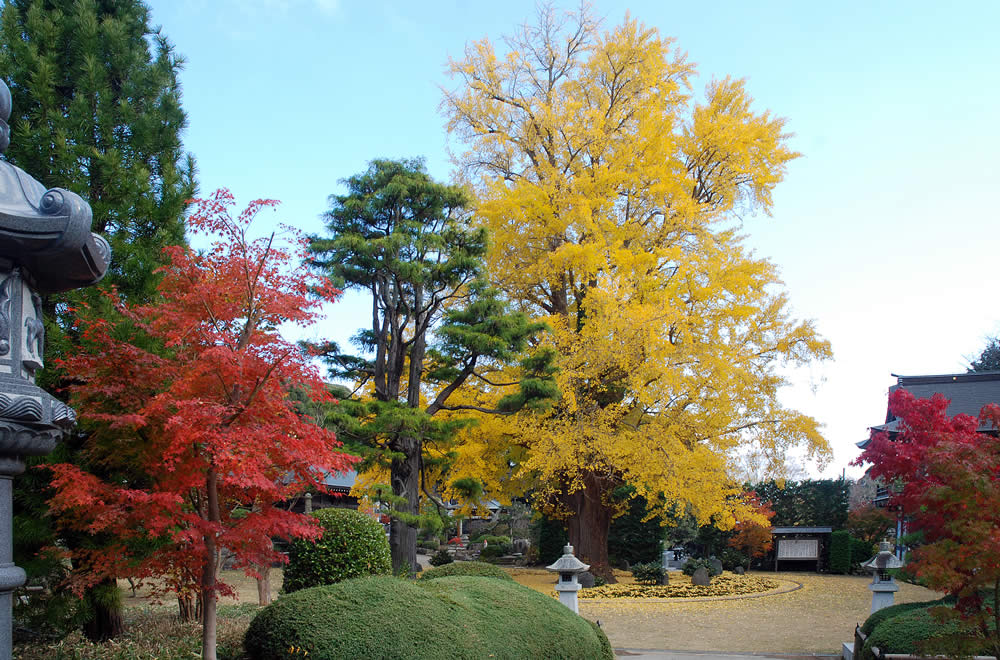 This ginkgo tree has a trunk circumference of approximately 4.4 meters, making it extremely valuable. It is a prefectural natural monument with a height of about 24 meters with an age of around 400 years. It is called “o-hatsuki” (“carrying leaves”) because when mature, its leaves bear small seed pods. 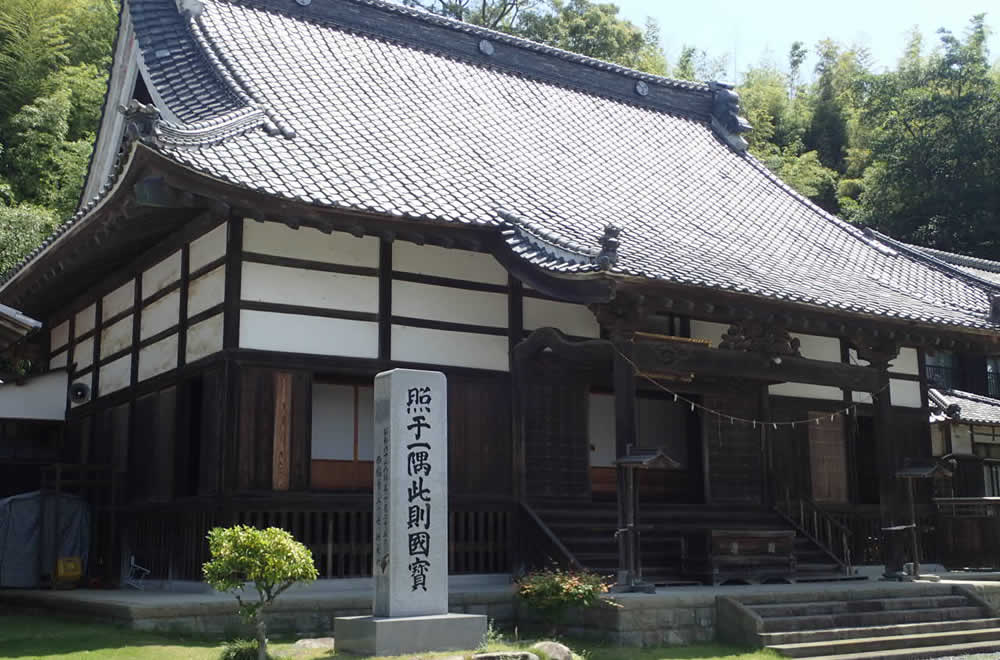 People speculate that this temple was built by a priest and monk from the temple of Hieizan (1004 to 1012), and a monk and Eshin Souzu (1429 to 1440). A wooden Amida Nyorai statue (Honson) is enshrined within the temple. 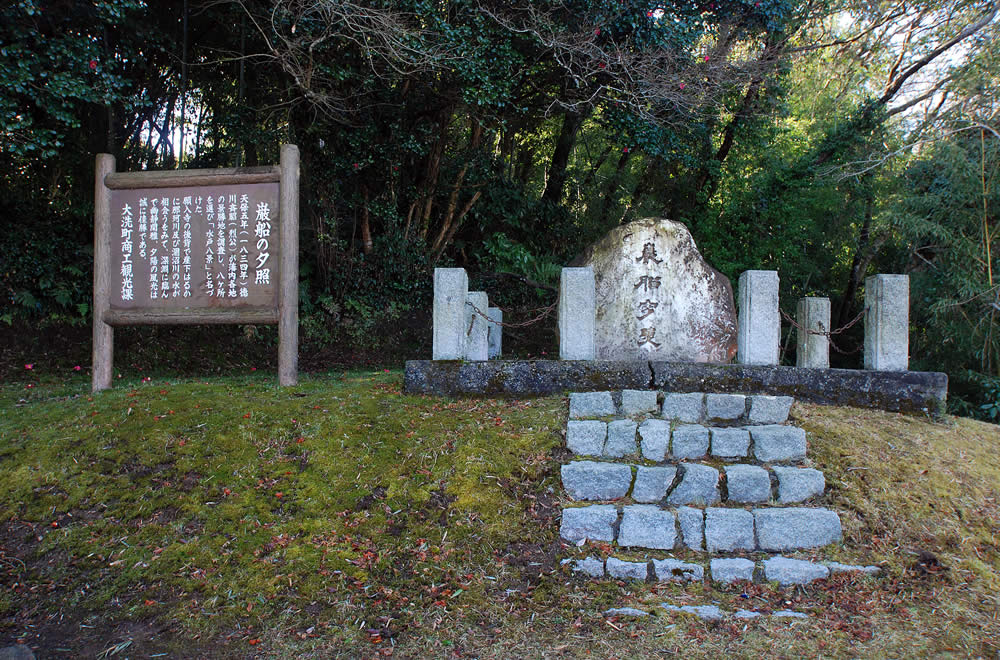 The Mito daimyo Tokugawa Nariaki (Rekkou) selected this area as one of the best eight views of Mito. It is a scenic spot overlooking Mt. Tsukuba. In 1834, Nariaki wrote "Iwafune no Sekishou" and built a monument out of kansui stone. 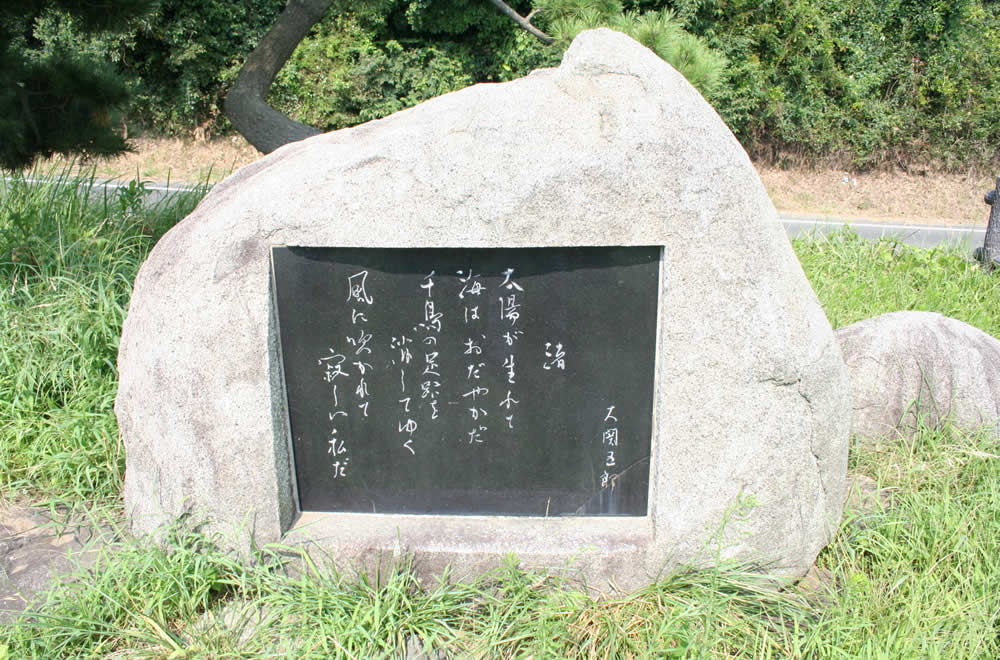 This monument is dedicated to Goro Ozeki, a poet born in Mito city.  His work originally consisted of free-form colloquial language, but he later began composing “shinnihonminyou” (modernized folk songs) with the help of Kitahara Hakushu and Noguchi Ujo. The panoramic view of Oarai from the hill where this monument stands is superb. 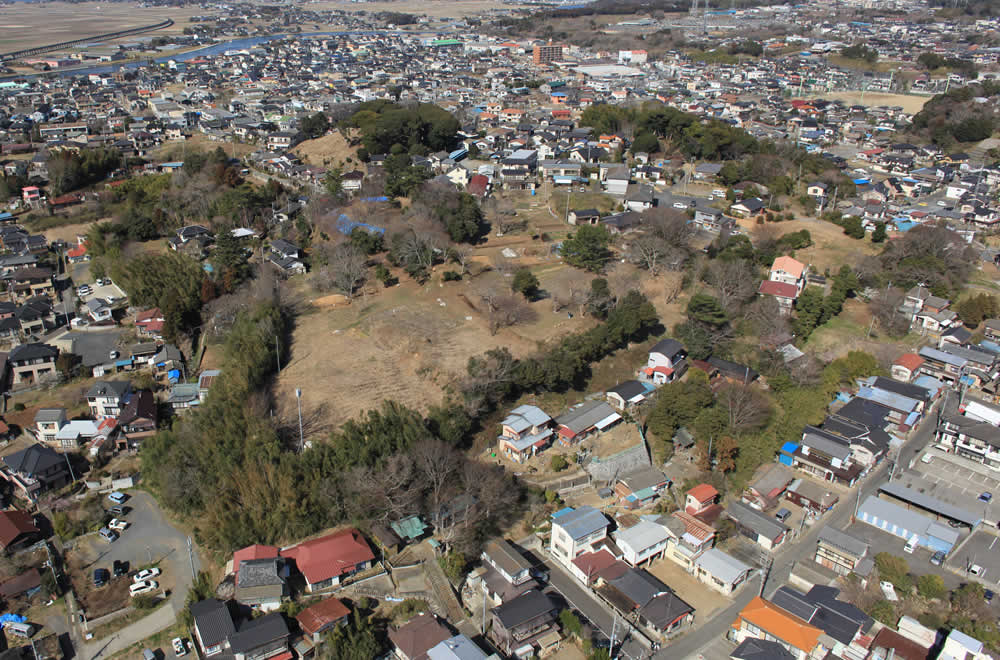 Kaibo Encampment was a marine defense facility that was built between 1830 and 1844. It was used to protect the shores from foreign vessels from countries such as Britain and the United States, which were unwelcome due to tensions between Japan and those countries at that time.

The 9th feudal lord of Mito, Nariaki Tokugwa, built the Isohama Marine Defense Encampment to protect the coasts. There is a 1.5 – 2 meter tall platform-like structure made of soil on the ruins of the encampment; it looks like the letter “L” when viewed from the top along the edge of the plateau. It is about 36 m wide and about 24 m deep.

The Kaibo Encampment building was decommissioned by the 1864 Tengu Party Rebellion. 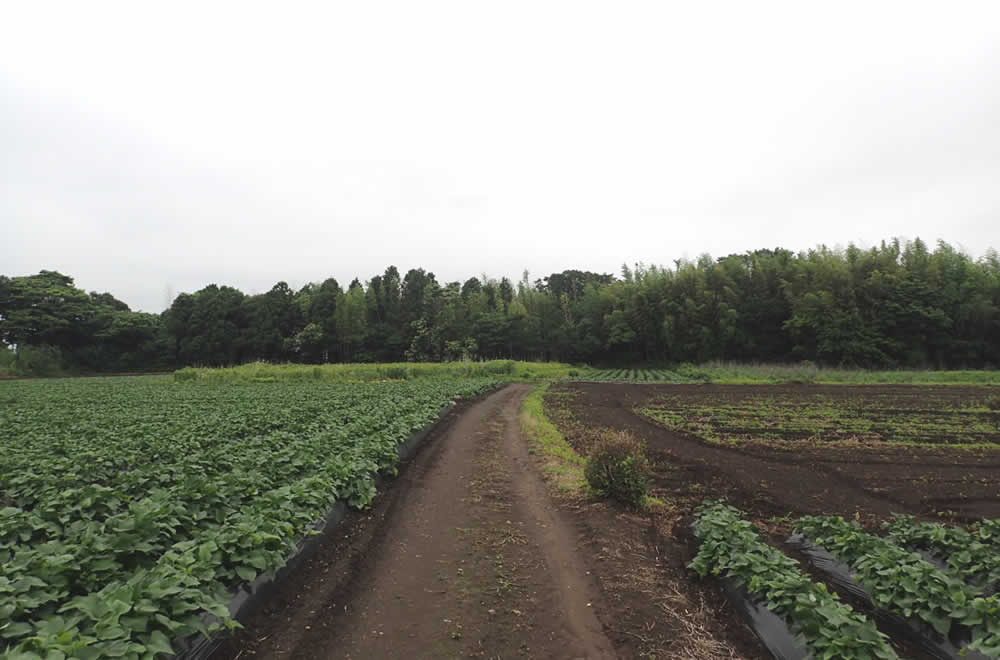 In 1700, the Moriyama Domain was established as a branch of the Mito Domain, but in 1702, an encampment was established in Matsukawa, and various facilities were constructed nearby.

In 1871, the Matsukawa Encampment burned down. 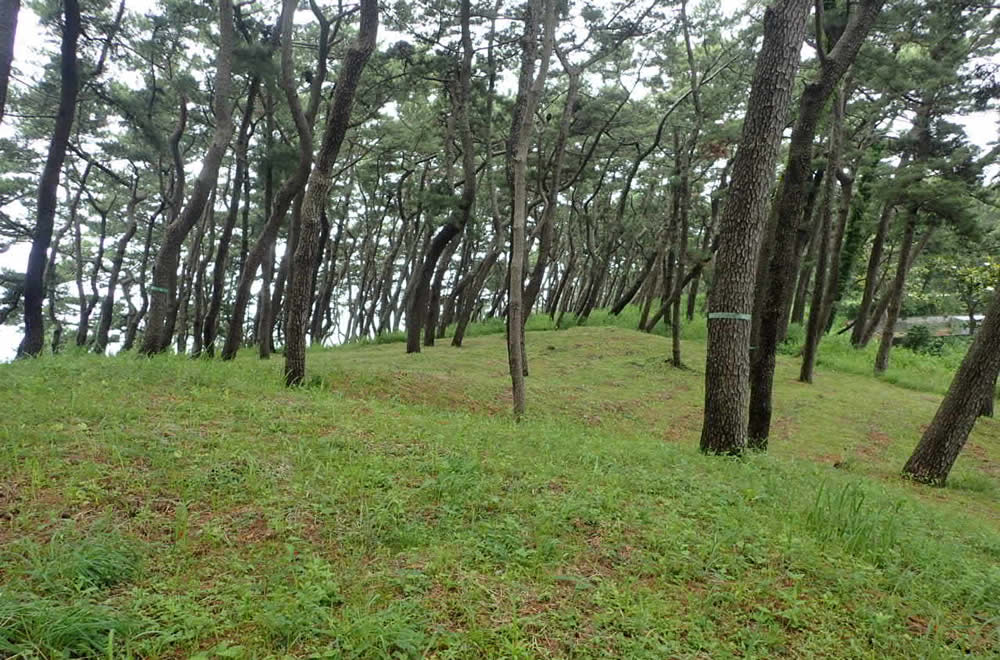 Daiba was an Edo-era military facility with the purpose of bombarding enemy ships that approached the coast.

In 1863, when foreign ships invaded Oarai, Tokugawa Nariaki rebuilt the Daiba facility for protection of the coastline.

A U-shaped clay structure with a width of about 200 meters was built, and a cannon which faced the coastline was placed inside it.

The area where the Daiba facility once was has now become a pine forest; it is well preserved with the exception of a few damaged areas. 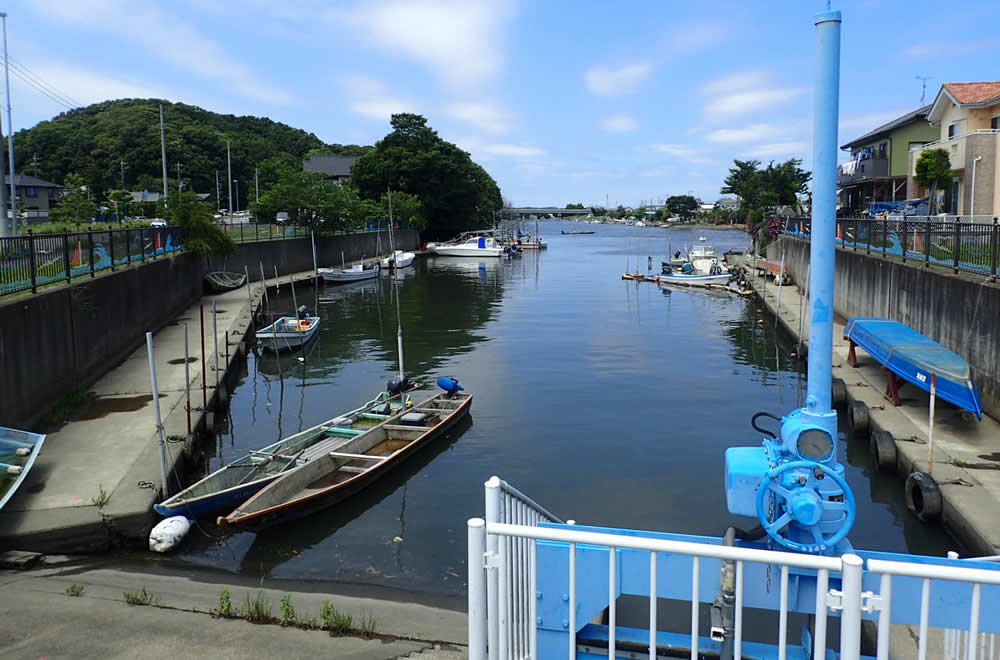 From 1704 to 1711, Mito Kaoru hired Matsunami Kanjuro to introduce various financial reforms. They dug a canal as a waterway with Edo, and planned to have it connect the Kashima Sea, Hinuma River and Tomoe River, but ultimately failed to do so. The over 1-kilometer-long canal in the Onuki area has been reclaimed several times, and only a small portion of the area that reaches the Hinuma River remains. 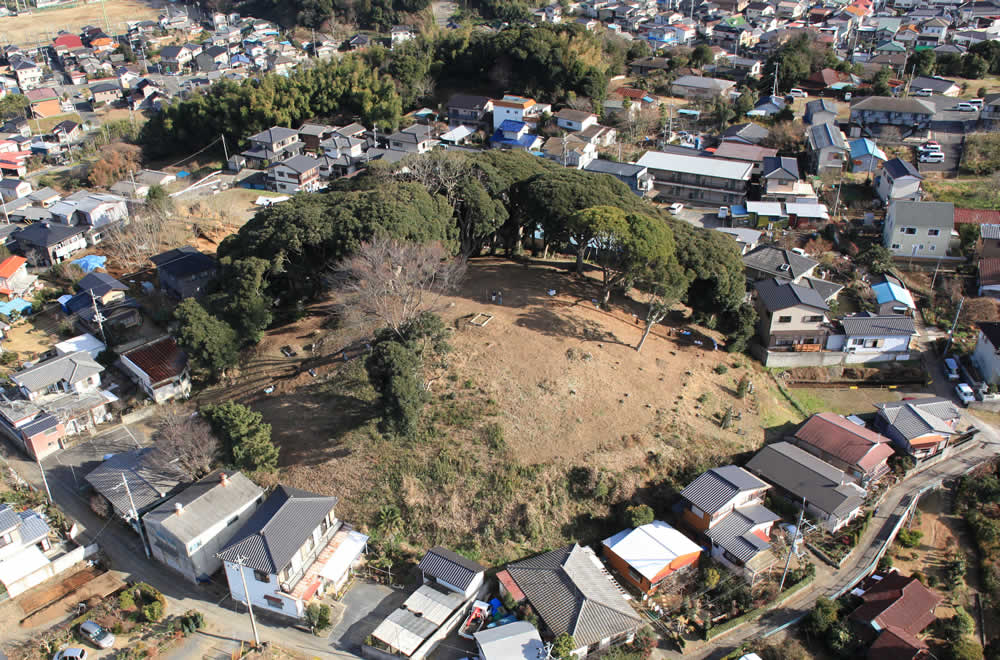 A burial mound located on a solitary hill about 35 meters above sea level. At approximately 95 meters in diameter and 13 meters in height, it is the third largest round burial mound in the country. You can see stone figures and “fukiishi” (stone burial markers) on the hill. It is estimated to have been built during the 4th century. It has been officially designated as a cultural asset by Ibaraki Prefecture. 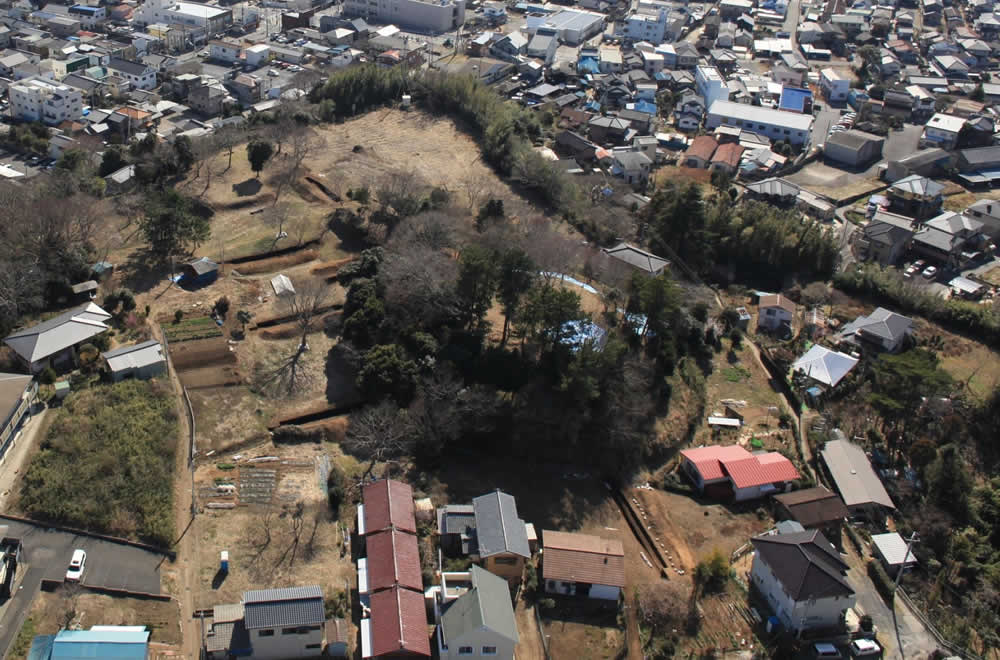 This burial mound is a round tomb with a total length of 105 meters, a diameter of about 65 meters, and a top height of 12 meters. It is assumed to have been built during the 4th century. In 1949, Kokugakuin University conducted an excavation of a burial site at the summit, which resulted in the discovery of a wooden coffin. In addition to human remains, there were over 4,000 personal objects (known in archaeology as “grave goods”), such as bronze mirrors, stone statues, wooden combs and accessories found. The burial mound is registered as an official historic site in Ibaraki Prefecture.